Who Was Hezekiah Beardsley? 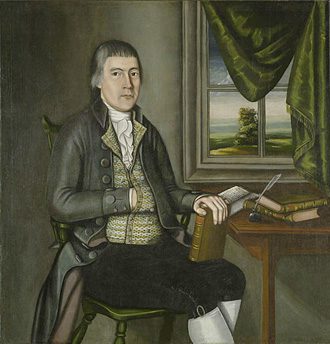 Hezekiah Beardsley was born in Stratford, Connecticut in 1748. He had no formal medical education, for indeed there were no schools of medicine in Connecticut until the Medical Institution at Yale College opened in 1813. He became a pharmacist and physician, probably through apprenticeships, and practiced both professions in Southington and Hartford between 1778 and 1782. In 1782 he moved to New Haven where he practiced medicine and opened a apothecary shop on Chapel Street between Church and Orange Streets. He died of consumption in 1790 and was buried on the New Haven Green. Later his headstone was moved to the Grove Street Cemetery.

Beardsley was one of 13 New Haven physicians who founded the Medical Society of New Haven County in 1784. One of the stated purposes of the Society was "collecting and preserving useful papers relative to the practice of medicine." Only four years later in 1788, the Society published Cases and Observations: by the Medical Society of New Haven County in the State of Connecticut. This volume, copies of which are preserved in the historical library of the Yale School of Medicine, was the first published transactions of a county medical society in America.

The most renowned of 26 reports in the transactions was contributed by Hezekiah Beardsley. He described a male infant, son of a Southington farmer, who had the onset of "constant puking in the first week of life." The child continued to immediately vomit almost everything that he was fed. Beardsley first examined the child in Southington when he was two years of age and noted that he was "lean with a pale countenance and wrinkled skin like that of old people." Beardsley, on the basis of his clinical observations and examinations, later diagnosed the child as having a "scirrosity in the pylorus." The child died when he was five years old. Beardsley, who had moved to New Haven, did not hear of the death until two days later. He went immediately to Southington to perform an autopsy. He wrote:

"The later period, the almost intolerable stench, and the impatience of the people who had collected for the funeral prevented so thorough an examination of the body as might otherwise have been made...The stomach was unusually large, the coats were about the thickness of a hog's bladder. The pylorus was invested with a hard, compact substance or scirrosity which completely obstructed the passage into the duodenum, to admit with greatest difficulty the finest fluid."

Beardsley's report was reprinted in its entirety in the 1903 Archive of Pediatrics by Sir William Osler who considered himself a pediatric practitioner and, in fact, was a founding member of the American Pediatric Society in 1888. Osler wrote that Beardsley had "completely and accurately" described the condition of hypertrophic pyloric stenosis of infancy. Although subsequent historical research has uncovered earlier possible cases from England, Beardsley's report is notable for its clinical and pathological correlations and, of course, for its uniquely American origin.